On Saturday, September 12 and Monday – Friday, September 14-18 ,2020 U.S. CENSUS BUREAU CENSUS TAKERS WILL BE GOING DOOR TO DOOR IN THE SUBDIVISIONS AND THE SCATTERED SITE HOMES to conduct CENSUS OPERATIONS which include interviewing  ONE MEMBER OF THE HOUSEHOLD, validating CENSUS information for Self-Response, or completing incomplete Census.

PLEASE KEEP A LOOKOUT FOR THEM AND THE TRIBAL CENSUS ESCORTS.

The Quechan Count team is currently assisting with escorting Census Takers around Fort Yuma Reservation. Door to Door Enumeration will begin Saturday, September 12, 2020 thru Friday, September 18, 2020 all day. The Animal Control Department would like the communities cooperation with ensuring a safe environment during their Door to Door Enumeration around the Fort Yuma Reservation. 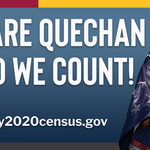