(I) Recounts. If an abstract show that the vote cast for two or more candidates for an office (with the highest vote) is tied, or if the highest vote is larger than the next highest vote by less than one percent (%) of the total vote cast for that office, there shall be an automatic recount. The Election Board shall open the ballot box and shall recount the vote for that office on all the unspoiled, unrejected ballots, rejecting any on which it is unable to determine the choice of the voter. A new abstract shall be prepared and read aloud to the public.

(J) Run-off Election. A candidate for membership on the Tribal Council must receive the highest number of votes cast for that office in order to be declared elected. If the abstract shows that the vote cast for two or more candidates for an office (with the highest vote) is tied, a run- off election shall be held not more than thirty (30) days after the general election. The Election Board shall supervise the run- off election following the same rules and procedures followed in the general election. Subsequent run-off elections may be held if necessary.

Absentee Ballot Requests
Request forms are enclosed with this letter; requests need to be mailed back to the Tribal Council Secretary. Absentee ballots will be sent out overnight through FedEx.

The Run-off Election will be held on Monday, January 9th, 2023, Between Michael J. V. Jack and Donald W. Medart Jr. The Election will take place at the Quechan Community Center from 7:00 AM to 7:00 PM. 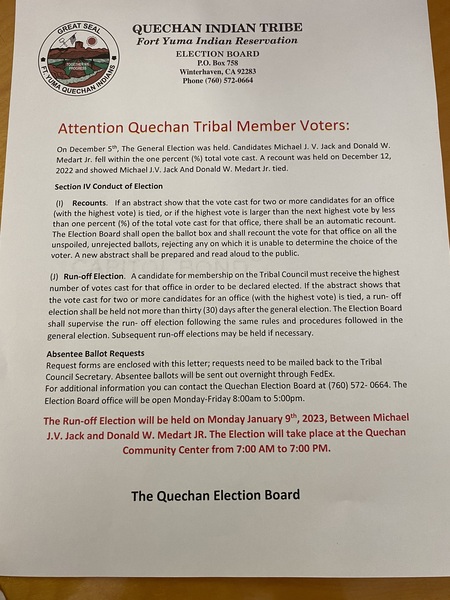