November is American Indian and Alaska Native Heritage Month. And it’s become the year of the Originativ. That’s what the Phoenix Suns organization is calling its new effort to showcase Arizona’s Indigenous history through the city edition uniform.   It’s helping display the tight bond between the game of basketball and tribal communities.

Miss Quechan 2022/23 Royal Phipps was invited to take part in the event to debut the Phoenix Sun’s new uniform.  The event was organized by Senior Director of Live Presentation for the Suns, Mr. Shawn Martinez, who is from the Navajo Nation.  Mr. Martinez with the assistance of Kenneth Shirley of the Navajo Nation contacted Mary Kim of UNITY (United National Indian Tribal Youth) to help gather representatives of the 22 federally recognized tribes in Arizona.

UNITY was able to gather children of all ages to be a part of the launch and showcase their tribes’ unique culture.

The Suns organization immersed itself in learning about the 22 tribal nations in Arizona. The center court is now a medicine wheel with 22 feathers surrounding it, honoring the tribes and the major impact basketball has on reservations.

Basketball is a huge draw for tribes. Footprint Center is the venue for the Native American Basketball Invitational finals.

The organization chose turquoise as the color of the new jersey, inspired by the turquoise stone meant to give protection. Every detail of the jersey was well thought out. From the color to the word for 'sun' in each tribal language down the sides, down to the medicine wheel at the bottom of the jersey.

The Suns debuted the new court and uniform against the Golden State Warriors at Footprint Center on November 16, 2022. 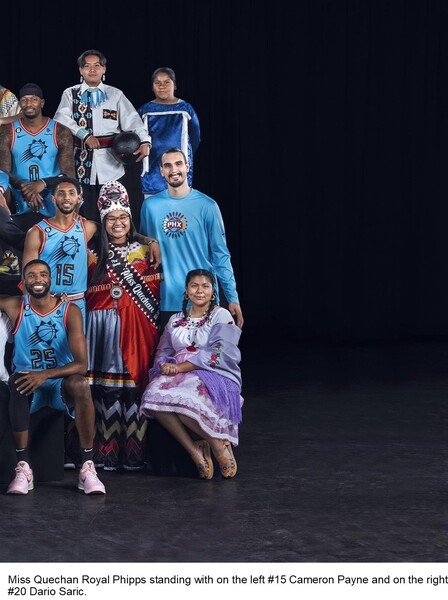