Don’t park along highways to play, pack an emergency kit

A lot of snow has fallen in the high country over the last week and with more forecast, the Arizona Department of Transportation wants to remind drivers who are heading north to leave prepared, be ready to spend extended time on the roads and never park along the highways to play in the snow.

Research where you plan to play in the snow and what designated parking is available there. If your destination is the Flagstaff area, the Flagstaff Convention & Visitors Bureau lists snow-play locations at FlagstaffArizona.org (follow the Winter Recreation Map link) and offers a hotline at 844.256.SNOW.

Also, it’s not uncommon for lots of desert dwellers to take the opportunity to head north to play in the snow. So, remember to pack your patience and expect to spend extended time in your vehicle getting to and from snow play areas.

It’s also important to leave prepared before heading north to play in the snow. ADOT’s suggestions of items to have in a vehicle include warm clothing and blankets, a fully charged mobile phone and charger, a flashlight with extra batteries, drinking water, healthy snacks, a first-aid kit and necessary medications. Get plenty of rest, plan your route and take frequent breaks from driving.

Make sure your gas tank is at least half to three-quarters full at all times, and ensure that your wipers, window defroster, headlights, taillights, brake lights and turn signals work.

Get more safety tips at azdot.gov/KnowSnow. 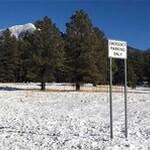