The Fort Yuma Health Center moved a giant step closer to reality on January 27th, as the Quechan and Cocopah Tribal Councils held a joint groundbreaking ceremony on the site where the new facility will be built.

Leo and Chris Pilkington, the Chief Operating Officer and Treasurer (respectively) of Pilkington Construction were also present. They were on hand to represent the local company which signed the construction contract with the Indian Health Service (IHS) on January 5th.

The contractor will be fencing off the area this month to keep “lookie-loos” out, so they can begin site preparation and safely move all kinds of large equipment around the site. “We have a tight schedule under our contract with the IHS,” says Leo Pilkington, “and we have a only 555 days under that contract to get this facility built and turned over to them. But safety is our first responsibility. We have to know who is on site, and where everybody is at all times. There will be open holes for foundations, live electrical wiring and waterlines run, as well as earthmovers, trucks and cranes moving around at various times. So we are required to fence around the site and have visitors check in and have an escort and a hard hat anytime someone has a reason to be there. And as a live construction site, most days, most visitors don’t have any reason to be there (inside the fence).”

Since most people will have to observe the construction from behind the Administration Building atop Indian Hill, both Tribes arranged to hold their joint groundbreaking before Pilkington comes in and takes over the site.

Local media came out to watch hundreds of people from both Tribes take their seats on two sets of bleachers, with rows of extra seating set up on the ground between them, in front of a speaker’s lectern.

The day began with Quechan Post 802’s Color Guard marching down the center aisle between the bleachers to “post the colors” while the National Anthem boomed out over the loudspeakers.

Acting CEO of the Fort Yuma Service Unit, Rear Admiral (Ret.) Dr. Robert Harry, saluted the colors as they were posted. He then said a few words of welcome before asking Mr. Paul Soto of the Cocopah Tribe to provide the opening benediction.

Both Tribal Councils were then introduced, beginning with our guests, the Cocopah. Sherry Cordova, Chairwoman of the Cocopah Tribal Council for 10 consecutive terms, chose to wait until all of her fellow Council members had their chance to speak. Quechan President Mike Jackson, Sr. also spoke after the entire Quechan Council had their say. Everyone, it seemed, wanted to give credit to both Tribes for coming together to present a united front in lobbying Washington to get this project designed, funded and approved. Council members have come and gone over the years, they said, but every Council, of both Tribes stuck together, speaking a consistent message to bring about a new health care facility, insuring a brighter future for all of our people.

And to mark the beginning of that construction, Mrs. Ray Stillings and Mrs. Faye Ortega of the Cocopah Tribe stepped forward after the President’s remarks, to offer a traditional blessing of the foundation for the new building. When they were finished, the Strong Hearts singers began to sing while the Quechan Spirit Runners, with Philbrick Emerson in the lead, offered up their prayers to the four cardinal directions.

It was finally time to meet those who would coordinate the men, materials and equipment to make it all a reality over the next 18 months. Lt. Commander Scott Raisor of the IHS Fort Yuma Service Unit stepped forward to introduce the contract awardees.

Leo Pilkington spent a few minutes describing what the new building will be like.

The new 76,265 square foot facility is designed to take care of the clinical, dental and optical health care needs of Tribal members residing in southwest Arizona and southern California. That means a lot of new medical equipment, previously unavailable here on the reservation, will be going into the new Fort Yuma Health Care Center, along with a larger staff to use it.

The project will also include “green features” such as covered parking with solar collectors for power generation, solar water heaters and “rammed earth” construction in some walls.

Pilkington says soils native to the area will be combined with a 10% cement mixture in the “Rammed Earth” process. This creates a material which emulates the flowing lines of a sandstone canyon wall. The resulting dense mass provides excellent insulation, further lowering energy needs.

The subcontractor for that part of the project, Rammed Earth Solar Homes, has recently completed the Phoenix Zoo, where the process was used in the workshop and administrative buildings. The laborers for that project were from the Navajo Tribe. Quentin Branch of Rammed Earth Solar Homes tells the Quechan News that “I really want this method of construction to be learned by as many tradesmen as possible.”

“In fact when I am building these walls (at the new FYHCC) I will also hold workshops in Yuma to help people get to know this process and promote more projects being built using this construction method.”

At the height of the project there are expected to be 100 to 125 tradesmen involved in construction. Pilkington says “Additional tradesmen may be needed to complete this large project and we look forward to working with Mr. Miguel (at the Quechan TERO office) to find these qualified personnel.”

Once the contractors were finished with their presentation, both Tribal Councils again stepped forward to join them in turning over their ceremonial spades full of earth, using special golden shovels acquired just for the occasion. As the shovels flashed, Tribal members and students from the Quechan and Cocopah Head start programs cheered and released balloons.

Honor songs followed, presented by singers from both Tribes. Community members, many in traditional dress, gathered in front of the seats between the bleachers to take part in a series of joyful dances. A final prayer was then offered by Quechan Tribal elder Wanda Barton, and Post 802’s Color Guard “retired of the colors”.

The crowd then moved over to the Paradise Event Center, to enjoy a free community lunch! 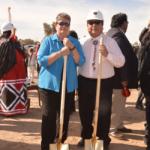